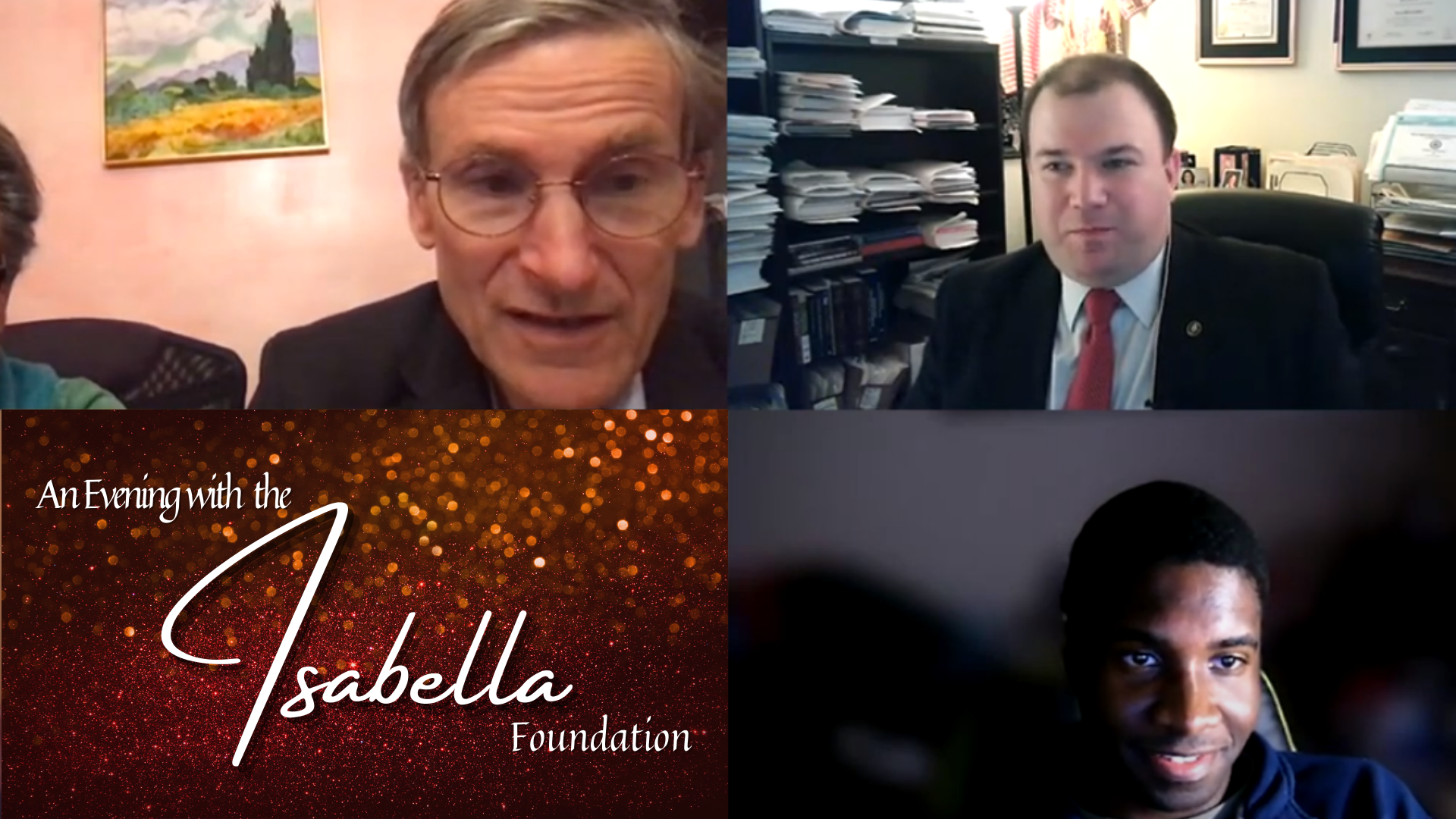 Due to the impracticality of holding an event in-person in 2020 as we had hoped because of COVID-19, we decided instead to host our year end “open house” virtually.  On November 12, Isabella Foundation’s friends and supporters joined us online to hear our staff discuss latest updates and plans heading into the new year.

Shaquille James began the evening with an overview of how COVID-19 has affected life in North Korea.  The fundamental nature of the country has not changed post-COVID.  As has been the case for many decades, North Korea is still a country defined by its human rights abuses, food insecurity and malnutrition, lack of freedom of movement, expression, thought and religion, and prohibition of access to free information.

Early in his tenure, North Korean leader Kim Jong Un adopted a policy of byungjin, or parallel development of both the country’s nuclear weapons and economy.  The promise of economic prosperity was undermined from the start by the government’s chronic mismanagement as well as international economic sanctions, exacerbated in 2020 by the sealing of China’s border and rigid COVID lockdowns inside North Korea.  Kim’s foray into international diplomacy was hardly more successful.  His flurry of summits with South Korean President Moon Jae-in in 2018 and U.S. President Donald Trump in 2018 and 2019 ultimately led nowhere, with inter-Korean relations reverting to its previous chilly condition and Kim’s meeting with Trump in Hanoi in 2019 concluding early with Kim’s failure to persuade Trump to agree to North Korea’s top objective of easing sanctions.  Concerned with preserving his legitimacy with the people of North Korea, seeking to offset his economic and diplomatic disappointments, Kim has since then emphasized bolstering the military and demonstrating its clout to the public, for example by rolling out a new ICBM missile at the Worker’s Party military parade on October 10.

The elite class in North Korea, which mostly resides in Pyongyang, has had a tense association with Kim Jong Un ever since Kim implemented mass purges, executions and imprisonments early in his reign.  Purges existed under Kim’s father and grandfather but were never as bloody, more along the line of professional relegation and exile to the country’s rural regions.  Now, because of North Korea’s practice of guilt by association of three generations of an accused individual’s family, the imprisonment of family members means that Kim’s purges have affected as many as an estimated 10,000 people.  Kim’s dilemma is that at the same time he is executing and imprisoning North Korea’s elites, he still needs them to manage the country.  His solution has been to try to purchase their loyalty by providing them luxury goods, although economic sanctions, and then COVID-19, have made that approach more challenging.  COVID-19 has caused problems for the elites in other ways as well.  The interruption of trade with China has been devastating for the business upon which many elites rely.  Pyongyang has also suffered from shortages of food and other amenities.

As for regular North Koreans outside Pyongyang, it is difficult to gauge how COVID has affected those living inland since 80% of defectors, who bring information with them out of North Korea, live near the border with China.  For those along the border, COVID related restrictions have certainly been a problem.  The trend towards tightening the border that was already underway since Kim’s rise to power accelerated with the outbreak of COVID-19.  Measures that were recently taken to limit cross-border movement reportedly include supplanting regular border guards with higher tier soldiers, issuing shoot-to-kill orders, and placing landmines close to the border.  That has caused serious hardship for those living in the area, many of whom rely on trade with China to survive.

COVID-19 has also made escaping North Korea far more complicated.  In addition to the enhanced border control measures just discussed greatly reducing the odds of successful defection into China, COVID travel restrictions have also limited defectors’ mobility within China.  North Korean escapees inside China who seek freedom must undertake a risky journey south through China to Southeast Asia while avoiding Chinese security agents who will repatriate them to North Korea if captured.  This year, domestic controls implemented by China because of COVID-19 have also had the effect of freezing North Korean defectors’ escape routes.  Numbers tell the story.  As of the evening of Shaquille’s presentation, South Korea had only accepted 190 North Korean defectors so far in 2020, down from over 1,100 a year earlier.  Because of this, efforts to rescue North Koreans in China, including by the Isabella Foundation, have essentially ground to a halt.

Orphans can certainly be counted among the segment of North Korea’s population that has suffered the most.  Known as kkotjebi, or “flowering swallow”, in the past they scavenged in the streets freely, often near train stations, individually and in small gangs, and even crossed into China relatively easily.  Now, because of Kim Jong Un’s order to clear the streets of kkotjebi that was issued before COVID, they have largely been swept away to a certain type of orphanage that is really closer to a prison in nature.

Next, Pavel Klein provided a brief recap of Isabella Foundation’s activities over the past year which, as noted, were seriously disrupted by COVID-19.  As 2020 began, we reflected on some of our successes in the year that just ended, 2019, including helping women trafficked to China and their children born to Chinese fathers escape.  Together with our colleagues, we helped establish a halfway house in a third country to temporarily shelter North Korean escapees while they waited to resettle in South Korea.  The last people to use the facility before the COVID lockdown were nine women and children who arrived in December 2019 and were resettled to South Korea the following spring.

Pavel described a few factors that have made conducting rescues more dangerous, even before COVID-19.  In addition to some of the points discussed previously, these include: the fact that bribing a border guard is more difficult now that the punishment for accepting such a bribe is death; increased fortification of border fences on both the North Korean and Chinese sides; and, the ubiquity of cameras with facial recognition technology has made it harder to mover around China anonymously.  Nevertheless, our colleagues on the ground in Asia express optimism that despite these challenges, it will be possible to resume rescues in 2021 once conditions start to relax.